Climate change, improper government administration, neglected city development rules and politics are taking a toll on Chennai, which is drowning 4th day in a row due to monsoon rains. 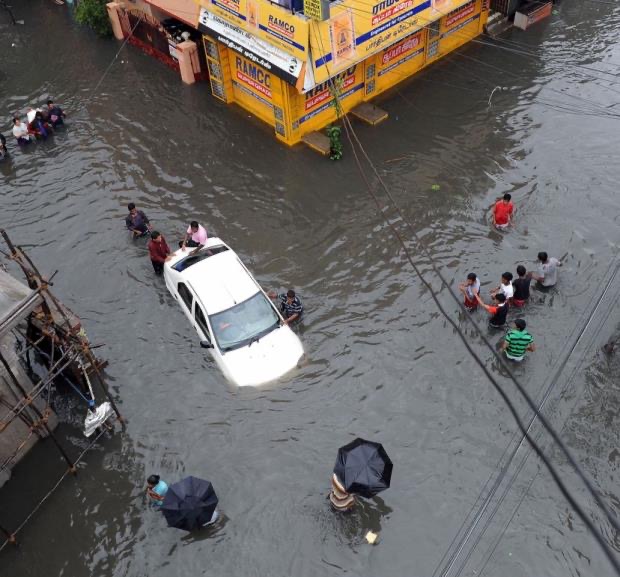 The scene of political floods in the capital of Tamil Nadu have changed and now the rain is taking its turn. After 2015, now the streets of Chennai have been flooded due to the recent heavy rains. Dissatisfaction and criticism from the people that ‘no government has come up with a permanent solution to the problem of stagnant water, except to provide relief supplies every time’. The 2015 AIADMK government in particular did not take the 2015 floods as a lesson. People say the current impact is the result of taking only a few actions just for the namesake. Former Chief Minister Edappadi Palanisamy said that there were 71,000 occupations in the watershed areas of Chennai. Of those, about 14,000 occupants who encroached lakes were said to have been removed. While critics still complain that not all the encroachments have been cleared. The recent heavy rains and their aftermath have raised questions as to why rainwater drainage projects are slowing down!

Following the floods in Chennai in 2015, a report was prepared on behalf of the Central Audit Department. It said, “Since 2005, there have been 525 irrigation ponds in Chennai and its suburbs that have been completely encroached upon. About 69 percent of the city's lakes are filled with occupants. To the extent that 381 ponds cannot be fully filled, there are occupations in its waterways. As the situation continued, even in the pre-Chennai floods of 2013-14, no successive government took any action to eliminate waterlogging. This is the main reason why the floods hit Chennai in 2015, ”the audit department said. The sad thing is that even after this warning, the last AIADMK regime did not wake up.

Geographically, the city of Chennai is a watershed. Reaching the city alone, there are three rivers, the Koovam and the Kosasthalai. To get to these, there are hundreds of lakes, ponds, infamous Pallikkaranai swamps, and streams such as the Buckingham Canal. When a city is expanded, it is the rule of the state that it must be expanded without encroaching on any of the water bodies there. However, the main reason for the floods is that most of Chennai's expansions have been carried out carelessly over water bodies. For example, Lake Korattur, which used to be 900 acres, has now shrunk to 600 acres. Similarly, the area of ​​Ramapuram Lake is 27 acres and now only a few acres remain. The size of Lake Villivakkam, which was spread over 214 acres, has now been reduced to 30 acres. The situation in Chitlapakkam and Maduravayal lakes is similar. The lakes have been magically disappearing as concrete forests have sprouted occupying the waterways. Resulting in The capital is flooded within two days of rain as the government does not see the need to stop the occupation.

The case has been pending in the National Green Tribunal since 2015 over the removal of encroachments on the Coovum, Adyar and Buckingham canals. In this case, a report was filed by the government in 2018. Of that, “Of the 26,300 occupations in the Buckingham Canal, 408 occupations have been removed. 13,592 encroachments have been detected in the Coovum River. Of those, we removed 8,962 occupations. Similarly, we have removed 4,161 occupations from Adyar river. Still, 6,186 occupations have to be removed” Said the Tamil Nadu Public Works Department. Dissatisfied with this response, the tribunal imposed a fine of Rs 2 crore (circa 0.3 million US dollars) on the Tamil Nadu government for not removing the encroachments.

However, the PWD, which had appealed to the Chennai High Court, got stay order from paying the fine. Again this case came for hearing in February 2019, before a panel consisting the First Sessions Judge of the National Green Tribunal, Adarsh ​​Kumar Goyal, technical members Ramakrishnan and Nagin Nanda, the Tamil Nadu government had to hear disappointment and anger of the court. “The Government of Tamil Nadu has failed in its efforts to remove and rehabilitate encroachments on the waters of the Koovam, Adyar and Buckingham canals. The sessions court condemned the government's negligence and said that it would have to pay a fine of Rs 100 crore (about 13.4 million Dollars) for the government's lax attitude.” added the tribunal. But even after that the views have not changed.

Speaking to the assembly on July 15, 2019, the then Chief Minister Palaniachchi said, “These occupations have not come to picture in a few years. Start from the DMK rule, the accumulation spans for many years. There are 71,268 occupations in various areas including Adyar and Koovam. Of these, we have removed 14,400 occupations. Steps have been taken to remove the remaining encroachments and build a barrier. ” The tragedy was that they removed only the huts inhabited by the occupiers near water bodies such as the Coovum, Adyar, and Buckingham Canal, and resettled them in Kannaki Nagar, Durappakkam, and Puliyanthoppu. But the bitter truth is that the government never sees the projects that huge companies have built by occupying waterways and waterways.

Some of the social activists who spoke to us said, “On the whole, the present state of affairs in Chennai is due to the negligence of both the DMK and the AIADMK. They have not implemented any far-sighted plan during their 50 years in power. At the same time, the AIADMK government, which has been in power for the past decade, must take additional responsibility for today's situation. Why did Edappadi, who claimed to have eliminated about 14,000 occupations during his reign, not lay hands on the remaining 56,000 occupations? Many buildings like hospital and college have been constructed occupying the lake catchment areas in Chennai Porur and OMR areas. Why did Palanisamy not see all this?

In the name of ‘Smart City’, they toppled the Pandi Bazaar in the city and dug a trench during the last regime. Except for the fact that they set up a beautiful sidewalk to see, the rainwater drainage works were not itemized. At present, in the night of November 6, T. Nagar became an island within the city. The newly-elected DMK government has been busy with rescue and relief operations as soon as it rains. Stalin, the Chief Minister of Tamil Nadu, spent several hours directly inspecting the rain-affected areas. When the water of Sembarambakkam Lake submerged Chennai in 2015, the then Chief Minister Jayalalithaa came out of the Poe’s garden estate only three days later. In comparison, we can appreciate Stalin’s immediate response in the affected areas, where he was seen in the raincoat on the first day of the floods.

However, the DMK government should have shown this momentum in precautionary measures before the onset of rains. Waterways should be drained. The meteorological center still uses radar bought since 15 years ago. All this may have been ordered by the present DMK government to investigate and change. Similarly, many occupations of large corporations and landlords have illegally leased lake lands. Flooding in Chennai during the monsoon season will be permanently prevented only if the Chief Minister removes the encroachments on the waterways and catchment areas by canceling these leases.”

After the Chennai floods in 2015, a team of 12 IAS officers was set up to find out the cause of the floods and submit a study to the government. In it, the team pointed out that there were no rainwater drainage canals at various places in Chennai and the existing canals were also out of order. They also recommended to the Tamil Nadu government to build rainwater drainage in 334 new places. Following this, the construction of a new storm water drain at a cost of 290 crore rupees was started. Those tasks are not yet complete. Similarly, the construction of 326 km of storm water drains, which was started at an estimated cost of Rs 1,101.43 crore, is only 70 per cent complete.

Chennai is a city located on a flat plain. It is normal for rainwater to stagnate here. The structure of the storm drains was designed during the British rule to prevent rainwater from stagnating. In Chennai alone, there are 1,894 km of these storm water drains, lie dormant without any maintenance. Only when it rains, the state administration dispose of the debris that enters the canals and once season is over, the department slows down off the duty. There is no point in blaming just politicians for flooding Chennai. The authorities are also complicit in this. The floodwaters affecting the capital are not confined to the city of Chennai. Rainwater from Kanchipuram, Tiruvallur and Ranipettai districts has to be mixed in the sea through Chennai. No officer comes forward to design plans accordingly and remove existing occupations. After the 2015 floods, some officials showed speed in removing the occupants. But over time, that has also been slowed down to a halt.

Stalin, the chief minister who set up the committees, said the first step was to remove the encroachments on the waterways and reclaim the catchment areas that the big corporations had been encroaching under the name of 'Patta'. Only if the encroachments are removed and the waterways and storm water drains are improved can Chennai be prevented from floating miserably. Will the Chief Minister save Chennai from aggression and future dangers?

After six years of heavy rains, the Chennai Corporation has embarked on a full-scale rescue operation to prevent another 2015 catastrophe. In all 15 zones in the corporation, 160 relief camps were organized and people were housed. Medical camps were also conducted at 200 locations. The corporation also provided food to 7,14,270 people who were starving!