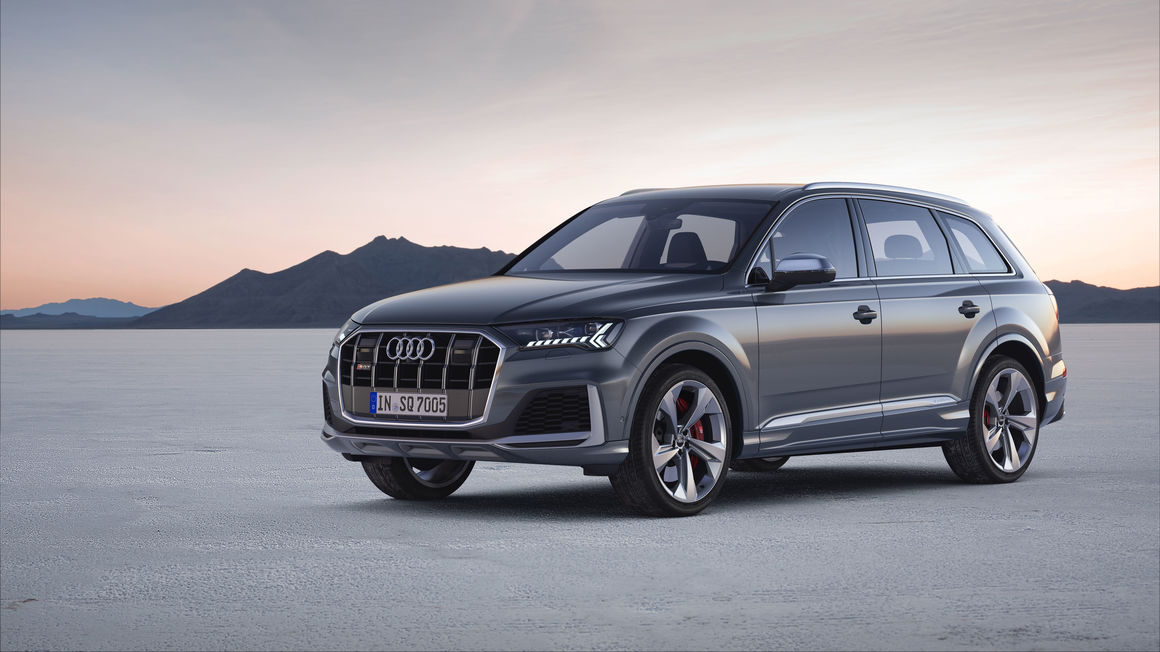 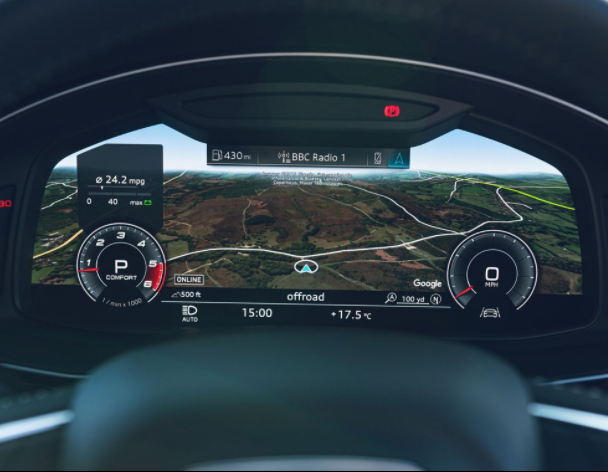 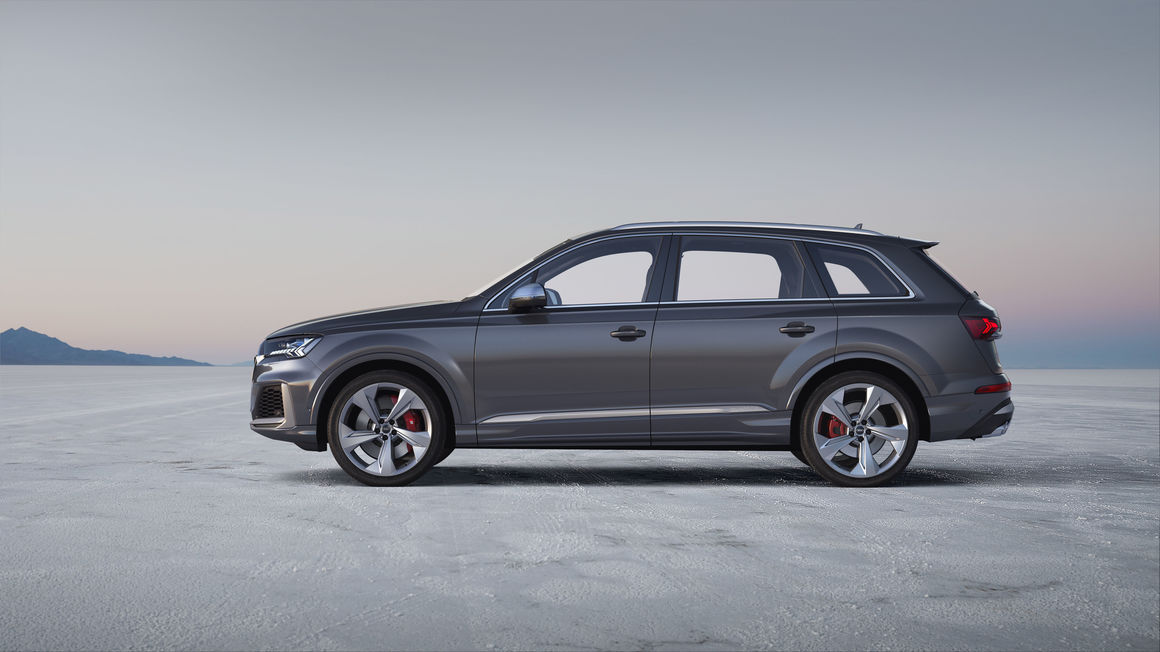 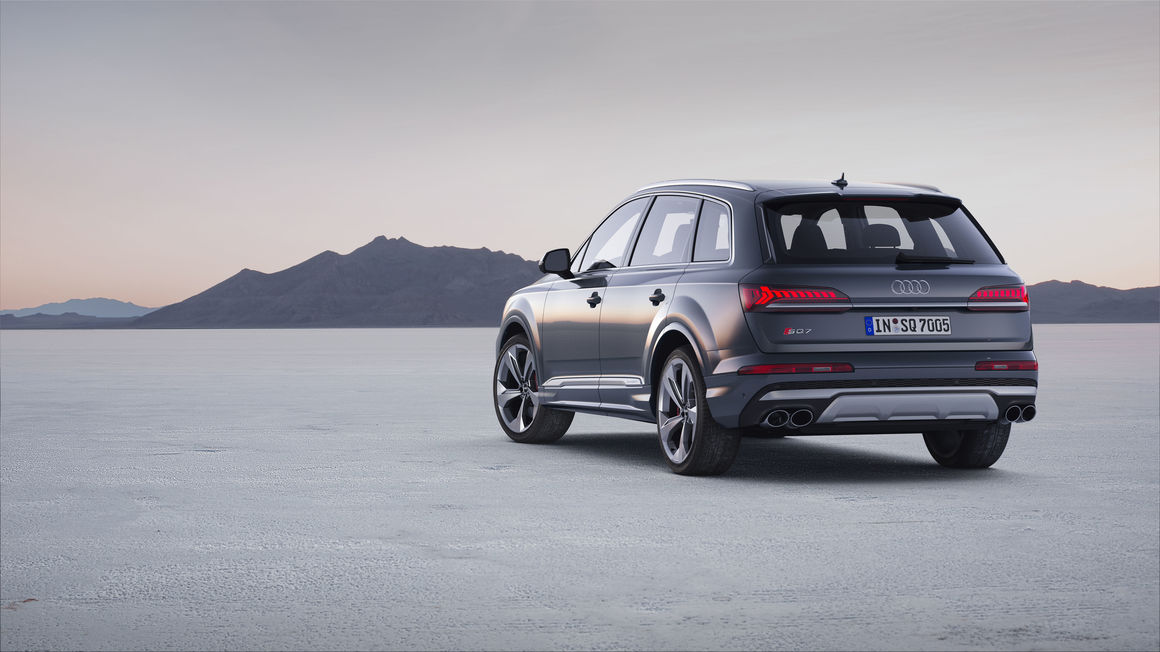 The SQ7 features all of Audi's signature S elements, like Alu-optic mirror housings and aluminium window surrounds, as well as quad exhaust tips.

The SQ7 really shines when it comes to performance, and we can thank the 500-hp V8 for that. Despite having the same weight as a well-fed elephant, the SQ7 is forced to accelerate quickly when you ask it to. This is demonstrated by its 4.3-second sprint from 0-60 mph.

The SQ7 has a lot more to offer than just speed. One of the many advantages of having 568 lb-ft of torque at your disposal is the ability to tow up to 7,700 pounds. The quattro system in the Audi SQ7 is also adept at keeping the SUV stable in wet weather.

With a redesign last year, Audi gave the SQ7 a new lease on life, and the SUV now looks as good as new. The high rider's performance focus is announced by the red parallelogram snuggled on the left side of the massive grille, and LED headlights sit on either side of the nose.

A pair of Y-lit headlights are connected by a chrome band at the back, and quad exhaust holes protrude suggestively from the silver diffuser. Summer performance tires are fitted on both models' 21-inch wheels. The Audi SQ7 SUV is slightly larger than its main competitors in terms of size. It had a length of 199.6 inches and a wheelbase of 117.9 inches.

Audi knows when to stick with what works, which is why the SQ7 and SQ8 both have the same 4.0-liter twin-turbocharged V8 engine. With 500 horsepower and 568 lb-ft of torque, the TFSI engine is a godsend. The engine is mated to an eight-speed automatic transmission and aided by a mild hybrid system that runs on 48 volts. Everything becomes a little more frenzied when you press the button (and then the screen) to switch to dynamic mode. The shifts are a little sluggish, especially in S transmission mode, which is separate from the drive modes. When you click the gear shifter from D to S, the transmission holds on to gears for longer, and downshifts happen sooner when you're braking.

The SQ7 has a range of around 382 miles when the 22.5-gallon fuel tank is full. The SQ7's cabin is absolutely stunning. The simple design is an undeniable win, and it's perfectly minimalist without sacrificing any tech or comfort. Touch-sensitive surfaces can be found almost everywhere, yet not in an obnoxious way.